You are here: Things to Do > Hovertravel 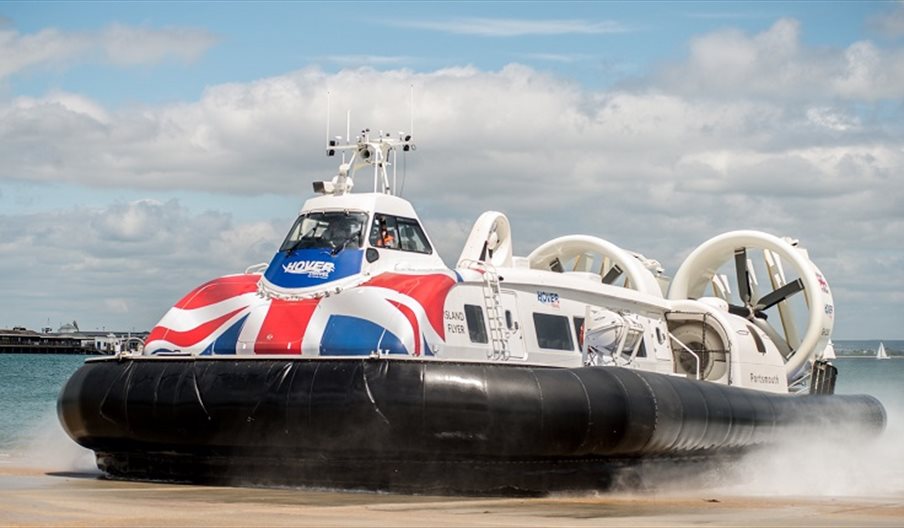 Hovertravel, the only scheduled Hovercraft operator in Europe, is the quickest way to reach the Isle of Wight. This fast service also has a frequent timetable starting from 6am and running throughout the day until 9pm. Hovertravel’s service is a speedy 10 minute flight across the Solent to the Isle of Wight.

Invented appropriately on the Island itself, the hovercraft remains one of the most iconic forms of transport, and travelling on the craft at 1.5 metres above the water and at speeds up to 30 knots is a unique experience not to be missed.

As the Isle of Wight has some of the best sandy beaches close to Portsmouth, a day trip can be as simple as a day on the beach. Less than five minutes walk from the Hover Terminal at Ryde on the Island is Appley Beach, offering a classic seaside setting. Here the sand and sea provide all the entertainment necessary for a wonderful beach outing.

If you want to experience some more of the Island then Southern Vectis, Island Line trains or even our Hovercycle's very own electric bikes provide plenty of options for getting around. Major attractions on the Island include Osborne House, Blackgang Chine, Isle of Wight Steam Railway, and the Isle of Wight Zoo.

Two very popular places to visit include Quarr Abbey, founded in 1132 and which is the site for the white stone used to build the Tower of London. There is also the Island's oldest tourist attraction; Shanklin Chine which is a picturesque leafy gorge, perfect for a tranquil moment of reflection as well as a great opportunity to see squirrels and rare plants against a backdrop of enchanting waterfalls.

Alongside the world class attractions, there are plenty of boutique shops and recommended restaurants to enjoy during a trip to the island. There is so much to do, that most visitors decide to stay for a few days or at the very least make a promise to return in the near future.

New for 2018 is the Gosport Excursion service. See the Hovertravel website for dates and further information.

Thank you to everyone who entered our Platinum Jubilee Fly-past competition. All the winners have been notified and… https://t.co/GG5idGixbz
30 Jun 2022   11:13:47
You can book HoverCare Assistance in advance, to get a little extra help with your journey. https://t.co/oj3YaK5las https://t.co/PXxr38wSRv
29 Jun 2022   17:13:00
facebook: https://www.facebook.com/HovertravelLtd