You are here: Venues in Portsmouth > The Royal Navy Submarine Museum 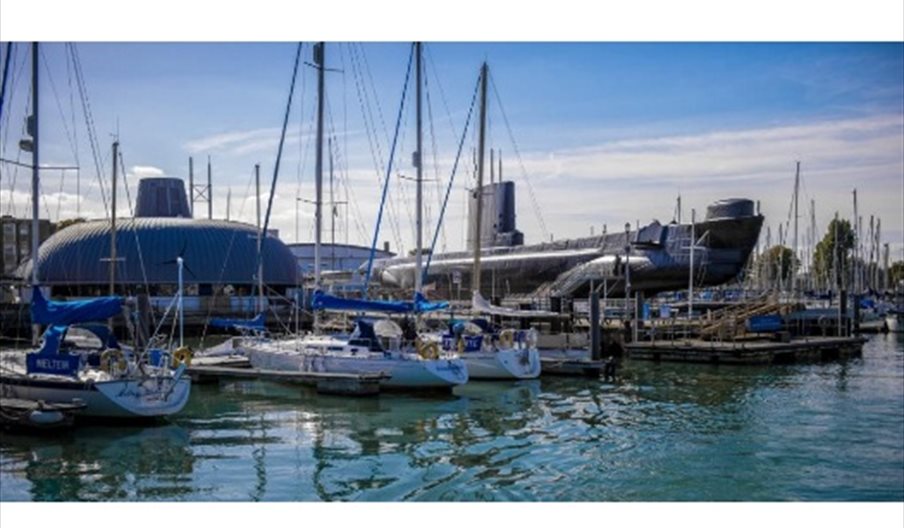 The Royal Navy Submarine Museum is a blend of stunning futuristic architecture alongside the majestic HMS Alliance. Both set on the shores of Portsmouth Harbour with views across the marina and to the magnificent Spinnaker Tower this is a great venue for a museum visit or a prestigious event. There is a great collection of personal items and artefacts from Submariners and Naval personnel that helps to tell the personal side to working on the Submarines and is available to see in the galleries in the John Fieldhouse Building. The Royal Navy Submarine Museum is available all year round for dinners, parties, wedding receptions, trade fairs, product launches, conferences and meetings. With our dedicated team available to organise your event or advise on suppliers such as caterers and entertainment, your event can run smoothly and stress free. For more information please email venues@nmrn.org.uk or call on 02392505609.

The Royal Navy Submarine Museum (RNSM) began in 1963 housed above St Ambrose Church in HMS Dolphin and was officially registered as a charity in 1970.

In 1978 the museum was moved outside HMS Dolphin’s confines, allowing full public access. It was at this time that the Royal Navy’s Training and Static Display submarine, HMS/m Alliance was donated to the museum. The complex that we now recognise as the RNSM opened in August 1981 with HMS/m Alliance as the principal exhibit. In 2011, the RNSM became affiliated with a new public organisation funded primarily by the MOD, the National Museum of the Royal Navy (NMRN). This organisation also includes the NMRN Portsmouth, Explosion Museum of Naval Firepower, HMS Victory (both situated in Portsmouth Historic Dockyard), Royal Marines Museum and the Fleet Air Arm Museum.

The main attraction is HMS Alliance, the UK’s only surviving walk through WW2 era submarine and the memorial to 5,300 British submariners who have given their lives in service. The RNSM has a total of 5 submarines in their collection with Holland 1, the very first RN submarine launched in 1901 and X24, the only surviving WW2 midget submarine regarded as significant maritime artefacts. Alliance and Holland 1 are the only submarines on the UK’s core ships register, so sit alongside HMS Victory, Mary Rose and Cutty Sark as ships of national importance. The Museum also has a collection of thousands of personal items, photos and documents detailing the lives of every British submariner who has served in the Royal Navy most of which are shown in The John Fieldhouse Building.

The John Fieldhouse building plays host to many functions from Wedding Receptions to Wedding Anniversary Parties, photo-shoots to birthday parties and Christmas dinners to talks and lectures. It is available to hire between 6pm and midnight 363 days a year. It is also available for hire for events such as conferences or exhibitions during the day on Mondays and Tuesdays from November to March. The events themselves take place in the wonderful entrance hall for The John Fieldhouse Building with views of the HMS Alliance, marina and the Spinnaker Tower. There is direct access to the jetty during the warmer evenings for welcome drinks and photographs. The maximum capacity is 200 people.

The HMS Alliance can also cater for exclusive Dinner and Drinks Receptions for 2 to 12 people. Behind the scenes tours and film viewings can also take place throughout the year.

The Miers Room is a great meeting space onsite with wifi, audio visual equipment and free parking. It is based in The Torbay building and can host up to 50 people. All bookings can incorporate a tour of the HMS Alliance and tours of the harbour can be arranged for your entertainment.

Busy Boats Bay provides a great place for birthday parties for the under 5s. It holds up to 34 adults and children and is separate from the museum providing a safe and fun experience for the whole party. It comes with a submarine and pirate ship to play on as well as fun toys and areas for birthday teas.