You are here: Things to Do > Journey By Dots, Clarke Reynolds 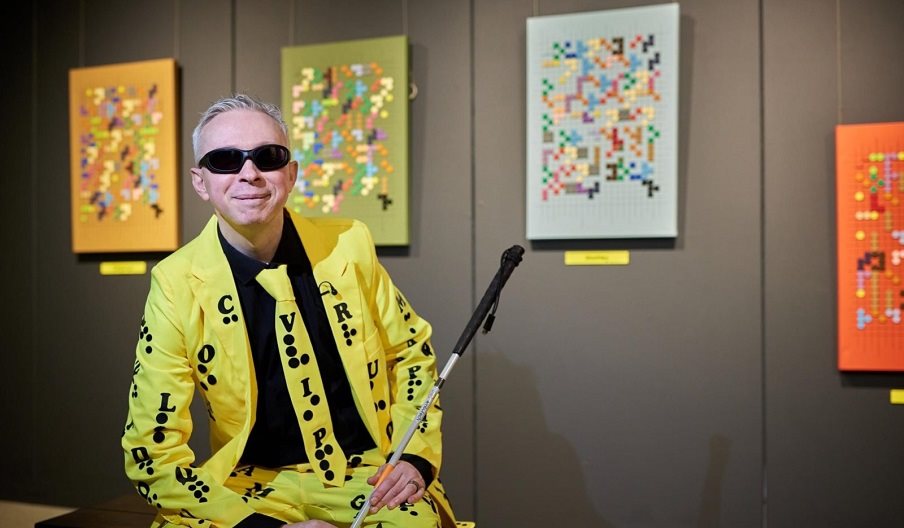 As a child in the 1980s, Clarke Reynolds remembers first visiting Aspex at its original location in Art Space Portsmouth on Brougham Road, for a school trip with Cottage Grove School. In the years that followed he would return to Aspex on a number of occasions, whilst his brother played in the neighbouring playground, and it's these visits that Clarke says changed his life.

"Aspex saved my life. It truly has. I don't think people realise, in my estate, 80% of people who grew up there are addicts, in jail or dead. I am not one of them. What more can you say? Art is my light as my world is getting darker."

Now coming full circle, the visually impaired artist has created a body of work that takes us on a journey through his life so far, and shares his hopes and dreams for the future.

Clarke Reynolds lost the sight in his right eye at six years old and was later diagnosed with the degenerative condition Retinitis Pigmentosa. Navigating the world with deteriorating vision, he left his job as a professional model maker and made the surprising choice to pursue a career as a visual artist. He has since become one of the most prolific artists in the city, working with schools, community groups and partners across Portsmouth, including Victorious Festival and Portsmouth Creates.

Clarke aims for his work to be educational and tactile – actively encouraging people to touch his art. In Journey by Dots, Clarke uses his distinctive style of colourful braille lettering to map out three significant routes on his journey to becoming an artist – visiting Aspex as a child, travelling to university to train in model making, and returning to the gallery on the bus from Leigh Park as an adult. The show also reveals Clarke's infectious energy and ambition through a collection of prophesying tactile paving slabs; predicting the artist's future achievements winning the Turner Prize and appearing on Strictly Come Dancing!

Journey by Dots has been kindly supported by Colas.